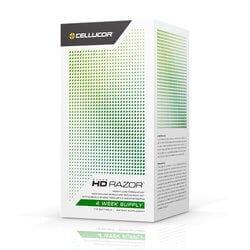 After the release of the Super HD Fire, Cellucor adds a new product to the now series of fat burners with the Super HD Razor, a stimulant-free fat burner. In this one though, Cellucor ditched the ‘Two Stage weight loss formulation’. So you’re wondering to yourself “but that is exactly as the stim-free version of the Fire why release the same product” but there is a difference. The Razor has a completely different formula and it was actually designed to be stacked with Fire. 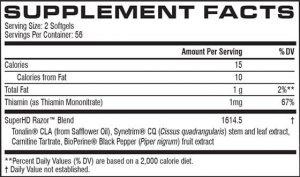 Unfortunately, the Razor has the same problem as the Fire had, and that is the proprietary blend. It’s pretty short but we still can’t know what the actual doses are for each ingredient in the blend.

Carnitine Tartrate – also known as Stalean, this amino acid has a lot of advantages, one of them being that it supports weight loss.

BioPerine Black Pepper –  This black pepper extract is marketed as a nutritional supplement that is known to increase the absorption of a variety of nutrients.

The Label’s Bottom Line- Unlike it’s older brother, the Super HD Razor gives a significantly bigger portion at 1614.5 grams per serving, with a serving being 2 softgels. That’s more than 1.5 times the amount the Super HD Fire gives in a serving. But there’s nothing too unique or exciting about the mix here.

The Super HD Razor isn’t available yet, but from our experience with Cellucor’s products, especially the Super HD series, it’s gonna be pricey. So like we said about the Super HD Fire, you could probably find a better deal regarding value for money.

Cellucor came out firing with their new fat burners, and the Super HD Razor stays on the same category as the previous products. Nothing really special about it’s formula and with the price that it will probably have, nothing to get too excited from.

Not sure which fat burner is right for you, check out our best 10 Fat Burners for 2017.

So What’s the Deal with Ephedra Supplements?