Insane Labz I AM GOD Review 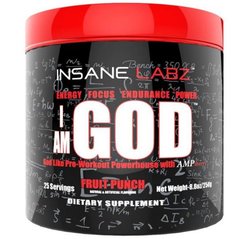 Talk about setting expectations…Insane Labz are setting the bar really high for themselves with a name like this. Who doesn’t want GOD LIKE POWER first thing Monday morning at the gym?? The promise here is a beefed up pre workout and the next level up from their well known Psychotic pre workout.

Well, it’s a good thing that God knows everything, because Insane Labz are keeping the Label secret. Insane Labz haven’t gone full exclosure like we would hope to see, especially considering the high price point. Let’s take a look at what we do know. 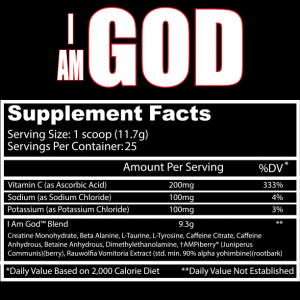 Creatine works primarily by increasing ATP availability within the body’s muscle cells. Creatine is also osmolytic, meaning it can draw more water into the cell.  This is the cause of the relatively sudden increase in muscle size. Clinical dose of Creatine Monohydrate is usually 5g per day but unfortunately, we don’t know how much Creatine Monohydrate is actually in I Am God unless Insane Labz comes out and tell’s us directly as they conceal the dose of everything in a 9.3g proprietary blend. If it does actually include the 5g of Creatine then well, not a lot of space left in the blend for other stuff…

Betaine Anhydrous, also called Trimethylglycine, is becoming popular as a pre-workout performance enhancer. Several studies have concluded that Betaine is capable of increasing strength,muscle size and enhancing aspects of recovery. We are used to seeing Betaine at 2.5g in fully dosed Pre-Workouts.

Beta-alanine is a non-essential amino acid. Unlike most amino acids, it is not used by the body to synthesize proteins. It works together with histidine to produce carnosine. Which is stored in your skeletal muscles to reduces lactic acid accumulation in your muscles during exercise. This helps to improved performance. 3.2g of Beta Alanine is the recommended dosage for full effect. And again we just can’t be sure on the dosage provided in I AM GOD.

L-Taurine helps pull extra water in muscle cells, which supports hydration, endurance, and gives some pretty sweet water-based pumps, there also research that shows that Taurine can help to bolster your focus during workouts. 1-2 grams is what we are expecting here.

L-Tyrosine is one of the amino acids, which are the building blocks of protein. Tyrosine works as a precursor to the neurotransmitters Dopamine and Noradrenaline, which both are used to help with focus, attention and motivation.  They are also the same neurotransmitters released by Caffeine consumption. Tyrosine has been shown to support mood and cognitive function to help keep you focused and on track during workouts. For Tyrosine to be effective you will need above 1g.

Over the years DMAE has become more popular as a nootropic supplement. It is a cholinergic compound that aims to improve cognitive function. It can potentially increase Acetylcholine brain levels and use it over time is supposed to enhance cognitive function.

What you are getting here is a mix of 2 types of caffeine: caffeine anhydrous and caffeine citrate which though all are generally speaking designed to get you going, the mix is supposed to get you going for longer periods and also prevent the post workout crash.

From what we know it Is taken from a form of Juniperus communis. It is known to decrease water weight and help assist in fat loss. It also can provide a smooth energy curve if you combine it with caffeine.

Rauwolscine is used as a stimulant for burning fat. It is also capable of helping increase your perceived levels of energy and focus.  Like AMPIBERRY people find that Rauwolscine works very well combined with Caffeine.

Where do we start? Do we start with the fact that there are ZERO pump/N.O boosters or with the  fact that there’s really nothing too spectacular on the panel or shall we just nail it down with that fact that  if you just add all the ingredients and assume they are at clinical dose you get to way above 12 grams for active ingredients, where the blend totals at 9.3g. Which means only one thing – UNDER DOSED! And if this wasn’t enough Insane Labz have the nerve to say that though the tub is 25 servings, you should start with half a scoop. Seriously?!

Ok, if you were not pissed by now, you are going to be ….I AM GOD is listed at $59.99 for 25 servings!! Yeah, 25 under dosed servings. What da hell were they thinking?? You have so many better alternatives at half the price! Just check out top 10 Pre-Workouts.

We believe you figured it out by now. This is not a Pre-Workout you want to buy. Honestly, and we are saying it with all due respect, this product is a rip off. If you decide to pay $59.99 to feel closer to god, you better off donate the money to your local church.

CHECK OUT OUR BEST 10 PRE-WORKOUT SUPPLEMENTS FOR 2017.

FRESH DEALS HUNTED DAILY! SEE THE LATEST PRE-WORKOUT DEALS FROM AROUND THE WEB!