The Deal with Bodybuilding Shoes - A Beginner Guide

Searching for the best bodybuilding lifting shoes is quite a difficult endeavour, partly because there is so much choice out there, partly because not many reviewers know enough about biomechanics to give an accurate review, and partly because wearing the right shoes for different exercises is actually quite a complicated process.

In this article, we will look at a range of lifting shoes and giving you an idea of what exercises they are best suited to, and which ones that they aren’t.

These shoes have reached mythical status within the bodybuilding world, due to the fact that they have been worn by serious lifters for decades. They are an excellent choice for deadlifts due to their very flat soles, this means that the lifter will be low to the ground and their posture will be stable. Compare this to running shoes which usually have a rounded base and an elevated heel. 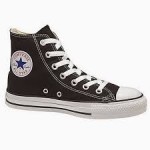 They are also good value for money and will last for years. In fact, these shoes are rare in that they usually look better when worn in. Anyone who has owned a pair of $100 running shoes that were ruined after the first cross-country race will understand why this is a plus!

However, there are some situations in which Chuck Taylors are not appropriate. They would obviously be terrible for any form of cardio (except possibly boxing) as the high tops of the shoes would limit agility, and the flat bases would inhibit running technique.

They might not be as effective for high-bar squatting, particularly heavy loads. This is because they do not offer the same amount of stability around the ankles and won’t allow you to squat as low, though saying that most powerlifting records have been completed wearing Chucks!

If you are looking to squat or perform any of the Olympic lifts then the Adidas PowerLift 2 is the shoe for you, these fill the gap that Chucks don’t cover, allowing you to squat lower in an upright position by using an elevated heel. They are also very strong along the sides of the shoe which are great for support when squatting.

The downside to these shoes is that they don’t have the versatility of Chucks, you can’t use them for deadlifts (they make you lean further forward than is ideal) and they are difficult to walk in. Even performing standing shoulder presses or walking to the water fountain is challenging whilst wearing them.

If you do buy these shoes (and they are a fantastic purchase), you should only really be wearing them for squats or Olympic lifting. This is perfectly acceptable if you have the money, but if you’re on a budget you might want to steer clear.

These shoes were created with Crossfit in mind, meaning that they are designed to be used in deadlifts, Olympic lifts, squats, 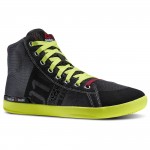 shoulder presses and all of the cardio based movements that Crossfit involves. They appear to have more stability than the Chucks and are more versatile than the Adidas PowerLift 2s, whether this means that they are the best of both worlds or a lesser version of each remains to be seen.

Very similar to the Adidas PowerLift, the Romaleos have been designed with Squatting in mind, but Nike tried to go the extra mile and as such, they were made lighter than the previous version so that they can be used in plyometric exercises such as Box jumps, and other more energetic exercises. They are an excellent choice but the high price is an issue.

Some people believe that training barefoot is best, and for deadlifting this may actually be the case. However, there are a couple of issues with that. Firstly, not a lot of gyms allow this nor do powerlifting competitions. Secondly, your feet don’t have much in the way of grip the last thing you want is for your feet to slip out from under you whilst squatting double your bodyweight. Also, not everyone’s feet are well suited to squatting. Some people need the shoes to help them get in the right position.

If you are looking for a great all round shoe on a budget then the Chuck Taylor Converse is the way to go. They’ve got a large fan base and have been around forever. The Adidas PoweLift and the Nike Romaleos s are an amazing choice for squatting and Olympic lifts, while the Reebok Crossfit Lite TR is a great all around choice for both Crossfit type exercises and general gym wear.

When it comes to pricing, it is possible to catch the Chuck Taylors on a deal for less than $30 and we have hunted down deals on the Reebok Lite TR for as low as $36. The Adidas can drop to $59 on a deal but average $79 and we rarely see the Romaleos drop below $139. Check out the latest gym apparel deals to see what we’ve hunted for you lately!

The Beginner’s Guide to Post-Workout Supplements