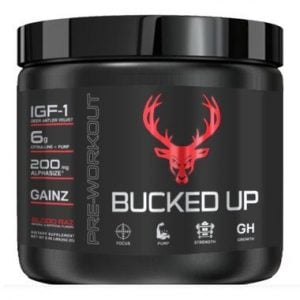 The guys at DAS Labs the makers of BUCKED UP definitely know a thing or two about marketing. In such a crowded PRE-WORKOUT market you need to have a ‘thing’, something that will separate you from the crowds. Finding a ‘thing’ is not an easy thing, but BUCKED UP has one. And its ‘deer antler velvet’, or as the DAS dudes are calling it “the deer antler velvet Pre-Workout’.

Made from male deer antlers during the stage when the antlers are covered in soft fuzz, it promises to elevate IGF-1 levels (Growth Hormone) and boost performance. If it sounds like an expensive ingredient, it’s because it is. Does Deer Antler Velvet work? Very debatable. But the NFL does ban it…so maybe there is something here.

READY for some hard-hitting pre-workouts? check out our best hardcore pre-workout supplement list for 2018. 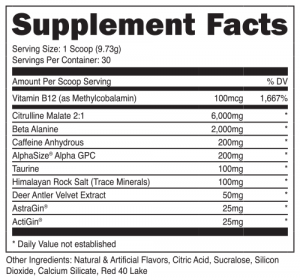 The Label’s Bottom Line-  The sad truth is that it seems that the guys at BUCKED UP were so focused on their ‘thing’ that they left everything else. This is to a large extent an under dosed, Mediocre Pre-Workout with Deer Antler Velvet. If you believe in DAV then go for it. If you don’t, then this sadly, then you have way better options (check out our best hardcore pre-workout supplement list for 2018).

Taste & Mixability – DAS Labs nailed it on taste and mixability. This is really one of the best tasting pre-workouts we had in months.

Effectiveness –  Well, in this case, it’s safe to say that for us it lived up to its label. You need to go 2 scoops to get the impact. But even then, it is just ok. Did we feel the Growth Hormone, Test Boosting impact? We didn’t. Will other people swear by Deer Antler Velvet magic? Certainly.

Safe to assume it is the cost of the Deer Antler Velvet that’s driving the cost of an otherwise underdosed Pre-Workout through the roof. Just for reference if you would go and buy a separate bottle with 30 servings of 50mg Deer Antler Velvet like in the Bucked Up, you will pay at least $50. So, again, everything here comes down to this one compound.

As it’s not ‘massively’ available yet, we haven’t hunted down any real deal on this Pre Workout yet, but just wait 🙂

Let’s take the ‘Antlers’ out of the equation here for a second. Most of the other ingredients are either under-dosed or ineffective. With a price tag that’s higher than any Pre-Workout out there, including the best of the best, we say it again. If you are a Deer Antler person, you think it works then go ahead, get yourself one, it’s going to be way cheaper than getting it separately.  If you are looking for a good Pre Workout and good value for money, then skip this one.

READY for some hard-hitting pre-workouts? check out our best hardcore pre-workout supplement list for 2018).

See the hottest Pre-Workout Deals from around the web!